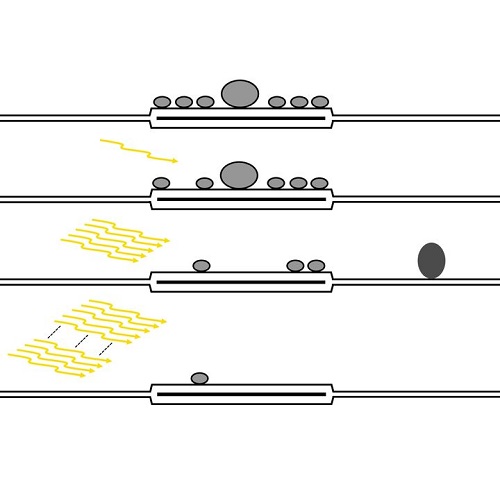 This article was originally published on Leica-Microsystems.com.

A fundamental question of neuroscience is: what is the relationship between structural and functional properties of synapses? Over the last few decades, electrophysiology has shed light on synaptic transmission mechanisms and electron microscopy (EM) has given insights into synapse morphology. Approaches used to correlate synaptic physiology and ultrastructure date back to the mid-20th century. The goal is to obtain snapshots of synaptic transmission, i.e., capture the dynamic process in electron micrographs. One of these functional EM approaches is called “Flash and Freeze” which combines optogenetic stimulation of synapses and high-pressure freezing. In this article, an innovative, enhanced method for Flash and Freeze, which can be applied to intact networks in mammalian acute brain slices and organotypic slice cultures, is discussed. It was used to probe vesicle pool changes during synaptic transmission at the hippocampal mossy fiber-CA3 pyramidal neuron synapse of mice. The results show release of vesicles after single and multiple stimuli, with depletion of the docked-vesicle pool as a structure correlated to the readily releasable pool, as well as fast endocytosis.

A main focus of cellular neuroscience is to better understand the relationship between structural and functional properties of synapses. Despite fundamental progress in our knowledge of synaptic transmission, many issues remain unanswered. The molecular composition, structure and function varies greatly across central synapses. Thus, analysis of clearly identified synapses is essential for this knowledge gap to be addressed.

Electron microscopy (EM) provides ideal spatial resolution, in the nanometer range, but it has the disadvantage of only capturing static images. To analyze synapses in live specimens, confocal, 2-photon, and optical super-resolution imaging have been often used. However, these methods are frequently used with dissociated cultured neurons, a reduced system. Furthermore, reaching sufficient resolution to identify individual active zones or single synaptic vesicles can be very challenging. An optimum approach to address the relationship between structure and function of synapses should provide information at the nanometer spatial and millisecond temporal scales.

Here a modified ‘‘Flash and Freeze’’ technique is described. This improved functional imaging method can be applied to acute slices and organotypic slice cultures to probe structural changes during synaptic transmission at precisely defined time points in identified cortical synapses. This progress was possible due to the use of thin acute slices, improved carrier geometry, recovery protocols, and optimized cryoprotection and freeze substitution.

As a proof of concept, Flash and Freeze was applied to the hippocampal mossy fiber synapse between dentate gyrus granule cells and CA3 pyramidal neurons, a key synapse in the hippocampal trisynaptic circuit. The mossy fiber terminal forms a larger synaptic contact with a distinct morphological ultrastructure, i.e., there is a large number of synaptic vesicles, variability in vesicle diameter, and presence of dense core-vesicles. From a physiological perspective, this synapse has several unique properties, including low initial release probability and prominent presynaptic plasticity. In addition, the freezing method was also successfully applied to the cerebellum and the brainstem.

Genetically modified mice were used to specifically target the presynaptic neuron being studied. In this case, the Prox1 promoter was used to target the granule cells of the dentate gyrus. For selective expression of channelrhodopsin, the Prox1-CreERT2 line was crossed with the reporter Ai32 (ChR2(H134R)-EYFP) mouse line.

Acute slices and slice cultures were prepared as previously described for optimal preservation of the hippocampal mossy fiber tract [1], both for electrophysiology and high-pressure freezing (HPF) experiments.

First, thorough electrophysiological characterization of synaptic transmission with optical stimulation was performed in both acute slices and slice cultures to determine the best parameters for the Flash and Freeze experiments, such as pulse duration and frequency. Care was taken to match stimulation power and intensity to that of the EM ICE high pressure freezer.

The experimental workflow showing the work steps for the modified Flash and Freeze method is described below in figure 1.

Next, HPF with optical stimulation was done using an EM ICE system and freeze substitution was done using either an EM AFS or EM AFS2 system [1]. Tissue from both slices and cultures were embedded at room temperature with Durcupan resin and then cut into ultrathin sections using an EM UC7 ultramicrotome [1].

Samples were visualized with transmission electron microscopy (TEM). Mossy fiber terminals were identified at the CA3 region of the hippocampus based on their characteristic and distinct morphology. Analysis, across all controls and experimental groups, focused on the number and diameter of docked vesicles at the active zone and potential endocytic pit formations in the peri-active zone region. All data was tested for normality and subsequent statistical analysis with non-parametric or parametric tests was performed.

The first challenge to overcome in order to perform functional EM experiments at the mossy-fiber-CA3 pyramidal neuron synapse was the selective targeting and optical activation of granule cells. Selective expression of channelrhodopsin in granules was achieved with the Prox1 promoter. A Prox1-creERT2 mouse line was crossed with the Ai32 (ChR2(H134R)-EYFP) reporter mouse line. Selective expression was verified with immunolabeling for EYFP both with fluorescence confocal microscopy and pre-embedding experiments for electron microscopy.

Next, the optimal settings for optogenetic stimulation were determined via electrophysiology experiments on acute slices and organotypic slice cultures [1]. The intensity of optical pulses was matched to the intensity reached in the HPF apparatus. These experiments determined the best pulse duration and frequency to be used for granule cell activation and action potential-evoked synaptic transmission to CA3 pyramidal neurons. With this particular cross of mouse lines, we found the best parameters to be 5 ms light pulses applied at a maximum 20 Hz frequency.

First, acute slice preparations for HPF experiments were done as similar as possible to those used for electrophysiology experiments. A recovery period, which is critical for neuronal health, was also included. Second, the slice thicknesses ranged from 150 to 200 µm. Third, larger diameter sapphire sandwiches with a spacer ring were used (6 mm outer diameter and 4 mm or 5 mm inner diameter). The sandwiches allowed the entire slice preparation to be frozen without further trimming, so the entire target brain region with the network was left intact. Fourth, both concentration and timing of cryoprotection were optimized. Slices were always kept at near physiological temperature and submerged in artificial cerebral spinal fluid (ACSF) which was also used as a filler medium. Just prior to closing the sandwich, a drop of ACSF containing 15% polyvinylpyrrolidone (PVP) was added as a cryoprotectant to prevent ice crystal formation. Finally, care was taken to test and develop optimized accelerated freeze substitution protocols to obtain an optimal ultrastructure. Besides the hippocampus, this method was successfully applied to the cerebellum and brainstem regions also. Ultrastructure analysis was focused on identified active-zone and peri-active-zone regions [1].

These improvements led to the formation of an optimally preserved ultrastructure in acute slices, comparable to the ultrastructure of high-pressure-frozen organotypic slice cultures for HPF experiments without optogenetic stimulation. Under experimental control conditions in the absence of stimulation, analysis of the docked vesicle pools showed that the number and diameter of vesicles are higher in acute brain slices as compared to organotypic slice cultures.

Analysis of the docked vesicle pool in acute slices after mild and strong optical stimulation resulted in several findings [1]. After a single pulse, evoking 1 action potential, there was a slight decrease in the number of docked vesicles, albeit not significantly, reflecting the low release probability of the mossy fiber to the CA3 pyramidal neuron synapse. However, there was a significant increase in the mean diameter of docked vesicles, suggesting that smaller vesicles have a greater chance of being released first after a single stimulus. After a brief train of stimuli with 5 pulses, there was a significant decrease in docked vesicles, suggesting a release of vesicles, and putative endocytic pit formation was observed in both slices and cultures. Finally, after a strong stimulus paradigm, previously used as a readily releasable-pool-depletion stimulus (100 pulses at 20 Hz), the docked vesicle pool was substantially depleted in both acute brain slices and organotypic slice cultures [1]. An overview of the results is shown in figure 3.

This study demonstrates that the Flash and Freeze technique is widely applicable and can be used in both acute slices and organotypic slice cultures from the mouse hippocampus as well as in acute slices from other brain regions, including the cerebellum and brain stem [1].

As a proof of principle for this improved Flash and Freeze method, the results provide insights into the mechanisms of transmission at the mossy fiber synapse, a key synapse in the trisynaptic circuit of the mouse hippocampus. The results shed new light on the relationship between structure and function under basal synaptic transmission [1] and during short-term plasticity [2].