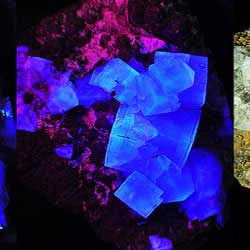 You may already use fluorescence as a tool in your microscopy and imaging work, but, do you know exactly what it is? Why are certain proteins and probes fluorescent? What causes this light emitting property? We’ll have a look at these and more questions in this article.

Start with a definition

We’ll start with a definition of what fluorescence actually is. According to a number of online and printed dictionaries, it’s something along the lines of;

“The visible or invisible radiation produced from certain substances as a result of incident radiation of a shorter wavelength such as X-rays or ultraviolet light.”

In the above statement, ‘radiation’ just means light. We’ll be dealing with light which we can view and image using the microscope- this can include visible, infra-red and ultraviolet.

You’ll also come across the word ‘fluorophore’ when dealing with this subject area. A fluorophore is basically the ‘certain substance’ alluded to in the above statement. These fluorophores re-emit light after exposure to a light particle (or photon). In a later article, I’ll be looking at the different types of fluorophores including fluorescent proteins and fluorescent probes.

…and back to ground

This excitation doesn’t last long though as the natural state of the fluorophore is the ‘ground’ state. In returning to this ground state, the fluorophore emits a photon at a longer wavelength (lower energy) and returns once more to a relaxed state. In the fluorophores which you will use for microscopy and imaging, all of this typically happens in a time period of around 0.5 to 20 nanoseconds! This cycle will continue (assuming a continued exposure to the excitation light) until ‘photobleaching’ occurs (see Jen Redig’s explanatory article here).

We can see you

Because the emitted photon is of a longer wavelength than the excitation light, then this difference can be distinguished and detected in the microscope set-up. Furthermore, as each fluorophore has, on the whole, distinct excitation and emission wavelengths, then they can be used to distinguish different targets of interest within the same sample.

Two other terms which are useful to know when setting out to do fluorescence microscopy are Jablonski and Stokes Shift.

Professor Alexander Jablonski (1898-1980) was a Polish physicist who, in 1933, first illustrated the absorption and emission of light by fluorophores in his now famous diagram. This beautifully simple diagram illustrates the activation from ground state to excited state and the emission of a photon on return to ground state once more. Here’s a simplified Jablonski Diagram:

There is not a direct return to ground state as the flurophore can pass through ‘Triplet States’ of energy (additionally, there can be many different ground and excited states), however, we’ll keep it simple just now!

Sir George Gabriel Stokes (1819-1903) was an Irish physicist, mathematician and politician. He made many advacnes and discoveries in the fields of optics, light and chemistry (to name but a few!). His work on fluorescence was first published in 1852- you can download the original paper here (entitled ‘On the Change of Refrangibility of Light’). The Stokes Shift (which was named in his honour) is the difference, in nanometres, between the peak excitation and the peak emission wavelengths. Each fluorophore has a distinct and individual Stokes Shift.

That’s all on the basics of fluorescence just now, but please let us knows if there are any topics within this field which you would like us to cover. Keep an eye open for a forthcoming article on the different fluorophores which are available for use in microscopy and imaging.

Have you ever been shown how to use a microscope properly? Or do you just dive right onto the microscope with little or no training and scant knowledge of the basics, then twiddle knobs, snap photos and expect the publication-quality images to appear? If it’s the latter you are certainly not alone! If only there…

Mercury burners are one of the most common light sources used in fluorescence microscopes, producing a wide spectrum of wavelengths making them a great light source for viewing your samples. But they do have their issues – one of which is their propensity to break or become damaged if not used and cared for correctly, which…